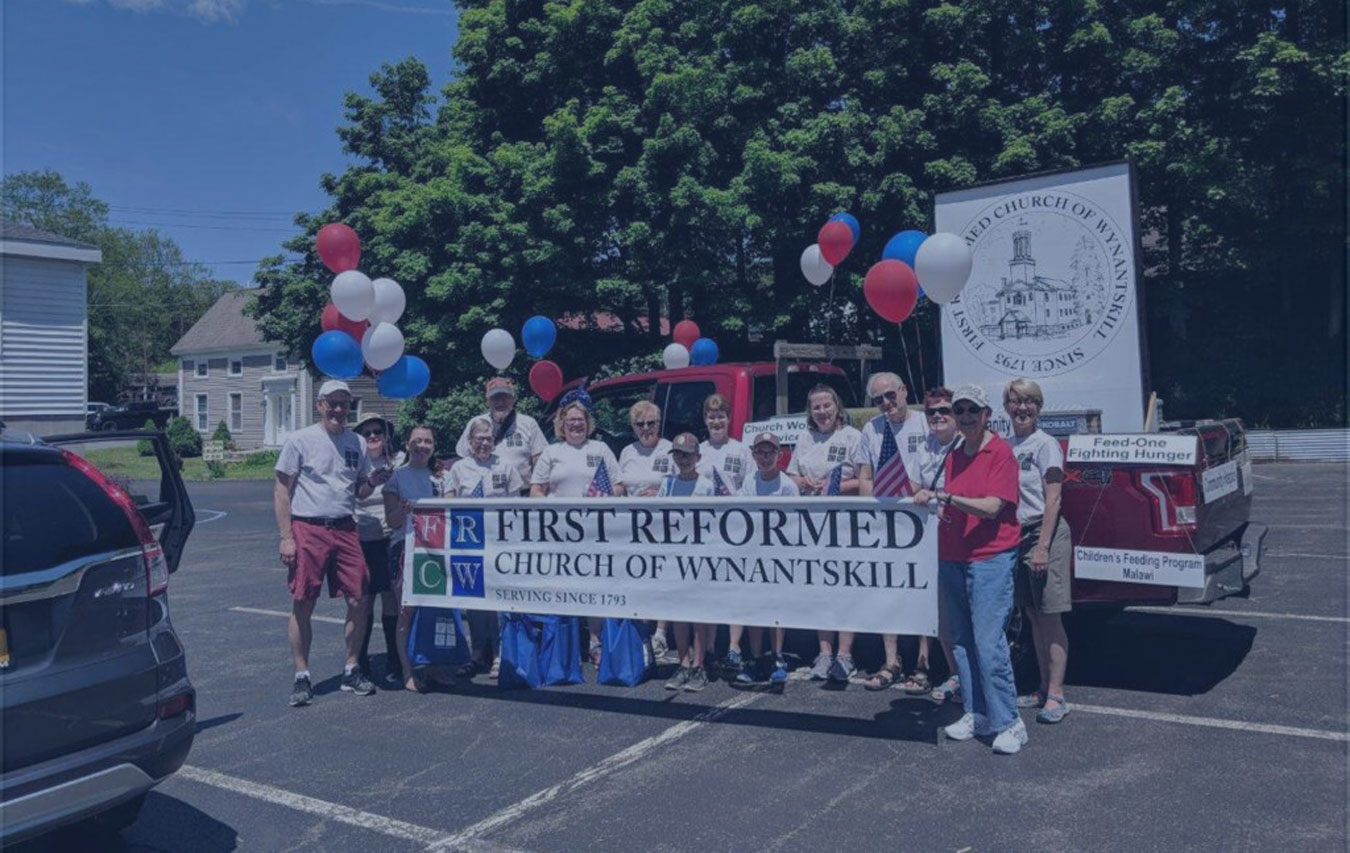 History of the Reformed Church of America

The word reformed means “change for the better”. We are part of a denomination (church brand) called the Reformed Church in America. In the 1500s groups of Christians, opposed to any authority or practice that they believed could not be supported by a careful study of the Bible, set themselves apart from the established church of that time. They began praying and worshiping and working together under a new umbrella: Reformed, changed, according to the Word of God.

The reform movement of the church in Europe would itself splinter over differences in belief or practice, often by nationality. Some groups kept the name Reformed; others called themselves Presbyterians or other names. But the influence of the reformation as a whole continued to spread, first across northern and central Europe and then across the ocean, with the first of the settlers in the New World. Our denomination has its roots in the Netherlands.

In this constantly changing world, the Reformed Church in America likes to say we’re “reformed and reforming according to the word of God.” We embrace fresh ideas and hold on to what’s best about our deep, rich past. We are the oldest European-based church body with a continuous ministry in North America.

The story of our history begins in September 1609 with Henrick Hudson’s voyage on the Half Moon in search of a suitable trading outpost on behalf of the Dutch East India Company.The Dutch West Indies Company was set up in 1621 and by 1623 they established Fort Orange as a trading post. The British took over control in 1664 and renamed the place Albany.The perpetual land ownership system of Patroonships was established by Dutch law in 1629 with the result that Kilean van Rensselaer purchased almost all of what is now Albany and Rensselaer Counties from Native Americans to be the “Colonie of Rensselaerwyck”.

The Patroon leased 160 acre tracts of land to immigrant farming families (tenants). The costs of migration from Europe along with some agricultural tools and some livestock were the initial investments by the Patroon. The annual rent to be paid by the farmers was a portion of the produce grown on the tract.Getting from the farm to the only Dutch Church in Albany was quite an ordeal. Crossing the Hudson River in rowboats, on a small sail powered ferry, or walking Winter’s ice after riding on horse back to get to the crossing location made for a long journey.The first groups of Rensselaer County members discharged from the First Church in Albany to worship in their own communities were at Schodack (1756), East Greenbush (1787), and Lansingburgh (1784).

The Memorial Cabinet in the Parlor contains the roster that lists the 77 founding members of the church (from about 15 families) who were dismissed from the roster at First Church in Albany in 1793 to form a church at Wynant’s Kill. (Kill means stream in Dutch. Wyant is the name of a person, Wyant Gerritse Ven Der Poel, who purchased half an interest in a sawmill where waterfalls supplied power.The original church foundation was rock, about 3 feet wide, below the frost line, with a size of 42 by 45 feet. The original construction, present to this day, consists of five main timber framing sections. Skilled craftsmen measured, mortised and assembled the structure’s main beams, which would have been cut, drawn to the site by oxen or horses, and seasoned for at least a year prior to being assembled. The closely fitted joints are held together with stout tapered wood pegs measuring an inch or more in diameter. Major intersections are braced by thick diagonal beams, mortised and pegged into place. Sawmill boards were used for the sheathing and roughing in the barrel vault ceiling. Hand-planed trim and columns are still evident in the sanctuary. The first windows were clear class, 24 panes, each 8″ by 10″, not at all fancy.Jacobus van Campen Romeyn served as the first Pastor. He also presided at Greenbush Reformed Church.

The procedure for paying the minister and for other expenses was by money and farm produce. Pews were auctioned; each was numbered by location and seat. Gallery seats were sold at public sales, one of which was on January 2, 1798.An 1802 record and sketch of seating arrangements has places for 193 occupants on the sanctuary floor and about 50 on the gallery (balcony) benches. The names on the sketch include male names for the gallery benches. Thus, the practices of the Mother Church of seating women, children and servants in the balcony may not have been the local pattern.The supply of immigrant ministers from the Netherlands was woefully insufficient in the colonial period and early years of the Republic. In 1803 the first Dutch Seminary in the United States was established to overcome this issue at what is now Rutgers University.

In 1815 land was purchased from Josiah J. Kinney on which was constructed a parsonage first used by Rev. Ralph A. Westervelt. His call specifies that he is to preach in English rather than Dutch, as had been the prior custom, in deference to the needs of German immigrants who did not wish to learn the Dutch language.In 1819 the “Reformed Protestant Dutch Church” was incorporated to replace oversight from the Netherlands of congregations in the United States.The Reformed Protestant Dutch Church of Wynantskill was incorporated on May 17, 1824 on the same day as the True Reformed Dutch Church Wynant’s and Postenkill unsuccessfully attempted to incorporate. At stake was control of the church building between seceding members who wanted stricter enforcement of church rules with respect to treatment of heretics and immoral persons. The seceded members built a their church on Church Street at the site of the present day Fire House.In 1836, two stoves were installed in the westerly corners of the sanctuary to provide heat during winter. Until that time, the church was not heated.In 1837, Lewes Fellows constructed the belfry and steeple.

The second fifty years were financially challenging in the wake of the 1824 schism. Money to pay either settled or supply pastors was hard to obtain. Maintaining the church property was even harder.The Civil War years were a turbulent period nationally. Sylvester’s History of Rensselaer County indicates that 67 soldiers from North Greenbush served and four died. These included men from the families of the congregation, although, there is no record that any from the congregation died in battle.

Statistics regarding Sunday School enrollment first appeared in the records for 1843, followed by a gap, until 1860.Repairs to the parsonage were authorized at a well attended 1883 meeting held in the parsonage. During the meeting the floor gave way. Several members who were unconvinced of the need for repairs fell into the sauerkraut barrel and other food-stuffs. A new parsonage was built in 1884.The heavy industrialization in Troy and associated population growth is the likely source of a steady flow of new members and baptisms toward the later part of the period.

In 1898, carriage sheds were built to provide more reliable facilities than had been the case with shared use of sheds at Whitbeck’s hotel which was located on the opposite side of Church Street.The church was raised up two feet higher on a taller foundation because in 1903 the State raised and widened Route 66 leaving the church in a hollow that flooded.The 1905 Sunday School class gathered funds to have a Good Shepherd stained class window installed. Twenty other stained glass windows were also installed at this time.

The church was lighted by electricity for the first time in 1912. Prior lighting was with kerosene lamps, which had replaced whale oil lamps.The church was raised up a second time in 1916 to have a basement under the sanctuary large enough for a hot air furnace. An assembly hall with two wood stoves for preparing church dinners was also added in the basement space.The Summer of 1941 saw completion of a 26 by 26 foot annex that now contains the kitchen and parlor spaces. At about the same time, an oil fired steam boiler replaced the hot air heating system.

A week of Vacation Bible School became a yearly event. Sometimes Methodist Farm at Crooked Lake was the site used for a combined program offered by the area’s Protestant churches.The church was used for the “Released Time” religious education program associated with the public school system starting in 1946. Youth from Protestant families were walked to the church on Wednesdays for the last period of the day. The program was a joint ministry with Third Presbyterian Church. (Released Time Religious Education is a concept used in the United States public school system wherein students enrolled in the public schools are permitted by law to receive religious instruction as long as classes are held off school grounds, no public money is used to fund the classes, and students have parental permission. The principle is based on the constitutional right of parents to direct the religious education of their children.)

The church was lighted by electricity for the first time in 1912. Prior lightThe founding of the Fowler Camp and Retreat Center in 1954 brought the opportunity for summer camp experiences for Church youth and families. The Church participation has ranged from 10 to 25 persons over the years.In 1955, a Church School building was added to the north east side of the Sanctuary, the Sanctuary was extended eastward to provide a new Chancel (altar) area, and an additional top story was added above the parlor.In April 1958 the name of the Church was changed to The First Reformed Church of Wynantskill.The present parsonage was completed in October 1964 and the prior one, located at the front of the same lot, was demolished.
A pipe organ was purchased and installed during 1968. The electric organ being retired was sold to the A.M.E. Zion Church of Troy.In 1972, General Synod approved the ordination of women to be Deacons and Elders. Mrs. Addie Ruth Timber was promptly elected at Wynantskill, followed by many others, with current practice seeking a pattern of leadership that is gender neutral.The ordination of women as Ministers of the Word was approved by General Synod in June 1979, including reversal of a decision by the Synod of Albany not to Ordain Rev. Joyce Borgman DeVelder.The addition of access for persons with handicaps, including an elevator, and some office and classroom space was completed in 1988.

In the Summer of 1993, Rev. Sophie Mathonnet-VanderWell becomes the first woman called to be Pastor at Wynantskill.To learn more, read “History of the First Reformed Church of Wynantskill” by Lee M. Bowman and John C. Hintermaier that was published in 1993 as a part of the Church’s Bicentennial anniversary. Copies are available at the North Greenbush Library and the Church Library.

Worship With Us on Sundays!

We can be located at 411 Main Avenue in Wyantskill, NY